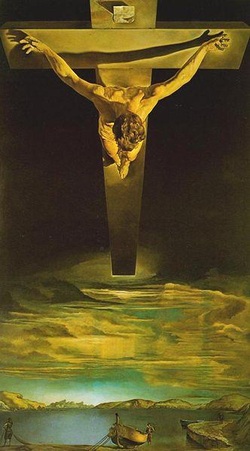 Christ of Saint John of the Cross by Salvador Dali
...we preach Christ crucified, a stumbling block to Jews and folly to Gentiles... (1 Cor. 1:23)

The Catholic Church began with Christ, and His apostles, when Jesus fulfilled the prophesies of the Old Testament with the incarnation through the Virgin Mary (Is: 7:14) and His suffering and death on the cross (see Is 53:13-15, Zechariah 12:1-l0, Ps.22:12-19, etc.).  Christianity is not a separate religion from Judaism; rather, it is the fulfillment of the Jewish faith (see Shoeman Article and Peter Kreeft article).

Summa Theologica
The "Summa" is Christian doctrine in scientific form; it is human reason rendering its highest service in defence and explanation of the truths of the Christian religion. It is the answer of the matured and saintly doctor to the question of his youth: What is God? Revelation, made known in the Scriptures and by tradition; reason and its best results; soundness and fulness of doctrine, order, conciseness and clearness of expression, effacement of self, the love of truth alone, hence a remarkable fairness towards adversaries and calmness in combating their errors; soberness and soundness of judgment, together with a charmingly tender and enlightened piety -- these are all found in this "Summa" more than in his other writings, more than in the writings of his contemporaries, for "among the Scholastic doctors, the chief and master of all, towers Thomas Aquinas, who, as Cajetan observes (In 2am 2ae, Q. 148, a. 4) 'because he most venerated the ancient doctors of the Church in a certain way seems to have inherited the intellect of all'" (Encyclical, "Aeterni Patris", of Leo XIII).
- Catholic Encyclopedia
Other Resources:  Hebrew Catholics  -  Conversion Stories  -  Where to Start  -  Salvation is from the Jews  -  Writings of the early Church Fathers
News  -  Home Page of Vatican City State  -