Respect for all Human Life
Never tire of firmly speaking out in defense of life from its conception, and do not be deterred from the commitment to defend the dignity of every human person with courageous determination. Christ is with you: be not afraid!                  ~ Pope John Paul II 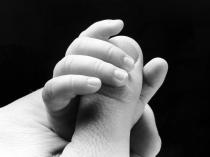 Catholic Teaching on Abortion
Any country that accepts abortion is not teaching its people to love, but to use violence to get what they want. That is why the greatest destroyer of love and peace is abortion.   ~ Blessed Mother Teresa of Calcutta

Respect for preborn human life is a foundation of Christian beliefs.  The Catholic Church has always been at the forefront of insisting we must respect all life from conception to natural death. The USCCB along with all the bishops of the world, and the Pope, remind us of this obligation. Each year the March for Life reminds us of the thousands killed through abortion: this march remembers the legislation which first allowed abortion to be legalized in the U.S. (Roe vs. Wade); the decision was based on a fictitious situation created for the purpose of getting abortion legalized. For an explanation of the Catholic position of the abortion, and other, pro life issues click here and here.  The legalization of abortion was due in large part to Margret Sanger, a co-founder of what would become known as Planned Parenthood.  In the beginning, little was said about a woman's right to choose; it was all about forming society to the image the early pro-abortion camp felt we needed; in other words eugenics.
Catholic Teaching on Euthanasia

Euthanasia: The act of putting a person to death painlessly or allowing them to die by withholding needed medical services, usually because of a painful and incurable disease. "Mercy killing" is another term for euthanasia. These "mercy killings" are sometimes used on persons who are not terminally ill but who have disabilities which make living life in an "ordinary" way difficult or impossible (e.g. old age, depression, deformities, mental illness, etc.)

The Catholic teaching on Euthanasia has consistently held that the value of a human person is not lessened due to their current state in life. Someone who is near death is no less valuable, as a person, then a young healthy person with years of life in front of them.  To Help clarify the Catholic teaching on Euthanasia the Vatican  issued a document entitled Declaration on Euthanasia which breaks down the teaching to its basic reasoning.  To a Christian, suffering is not meaningless nor useless; all suffering can be salvific when united to the suffering of Christ on the cross. In other words, we are invited by Jesus to participate in the salvation of other human beings.  This is not because He needs us but simply because He chooses to allow us this privilege.  If someone is terminally ill extraordinary means of preserving ones life are not morally required, however, we should always provide all "ordinary" means of preserving life.

During World War II, the Nazi's used Euthanasia as a means of manipulating their population's make up (i.e. eugenics).  Some groups and individuals in the U.S. were full supporters of this eugenics program including Margaret Sanger who was a co-founder of Planned Parenthood the world's largest promoter of abortion.  Ms. Sanger was an enthusiastic supporter of the eugenics movement as well. The American Eugenics Society was founded in the U.S. in 1921 for the purpose of promoting eugenics in the U.S., and was supported by many high profile individuals. (see article on this founding here),